We have noticed that there have been recent news, rumours, and debates over the litigations between Cloud Innovation Ltd (“CI”) and AFRINIC, and AFRINIC’s actions against Cl about CI’s AFRINIC membership and the corresponding number resources. This may have led to significant concerns from our customers over our service and business. We would like to take this chance to explain what has happened and reiterate our current situation so as to dispel rumours and maintain the trust the market has in CI as the leading IP address solution provider.


Recently, the Supreme Court of Mauritius has granted two court orders, with AFRINIC making one undertaking relevant to the said matters – proving that CI has been operating and using its number resources as an AFRINIC member in a completely legitimate manner. The said three legal proceedings are listed below:


Injunction Order made by Supreme Court on July 13, 2021 (Attachment A)


A judge’s order dated 13 July 2021 was granted in favour of CI restraining and prohibiting AFRINIC from terminating our membership and reclaiming our number resources.

AFRINIC, in its communications with CI, clearly stated that whilst they were duly notified with the court Order and formally requested to comply, they deliberately refused to obey and comply with the said court Order and refused to reinstate the membership of CI.

Undertaking given by AFRINIC on July 15, 2021 (Attachment B)

On 15 July 2021, the CEO of AFRINIC appeared before the Judge in Chambers of the Supreme Court of Mauritius and gave an undertaking to comply with the said Order above in its entirety. Notwithstanding the formal undertaking given by the CEO on behalf of AFRINIC, the latter refused to reinstate the membership of CI and only reconsidered its position after being warned of contempt of court proceedings. The membership of Cl was finally reinstated many hours later during the night of 15 July 2021.

By way of a Judge’s Order dated 23 July 2021, the funds of AFRINIC held in bank accounts at SBM Bank ( Mauritius ) Ltd and Mauritius Commercial Bank Ltd, up to the sum of USD 50 Million, have been attached in favour of CI, pursuant to its claim for damages against AFRINIC as a result of the aforesaid unlawful termination and illegal acts and doings against CI.

Considering everything above, it clearly indicates that the actions taken by AFRINIC against CI are being done in bad faith and upon frivolous grounds to tarnish the reputation of CI.. As an AFRINIC member in good standing, CI has consistently abided by relevant laws and policies and strives to contribute to the community to the best of our ability. We have never intended to take any action against AFRINIC, but we are also obligated to take the appropriate measures to protect ourselves, the hundreds of our customers, and hundreds of millions of end-users. Up to this day, we still welcome the chance of AFRINIC coming to an understanding of its own fault and taking the relevant culpability and responsibility that would remedy the situation. In doing so, we at CI would be open any time to any reasonable resolution proposed by AFRINIC.

We hope that we have, by setting out the recent events, addressed all the concerns and clarified all the rumours circulating in the market lately. We deeply and sincerely appreciate the continuous trust from our customers in us and our service. We hope to clear any concerns that may have arisen and any false rumours about our operations. 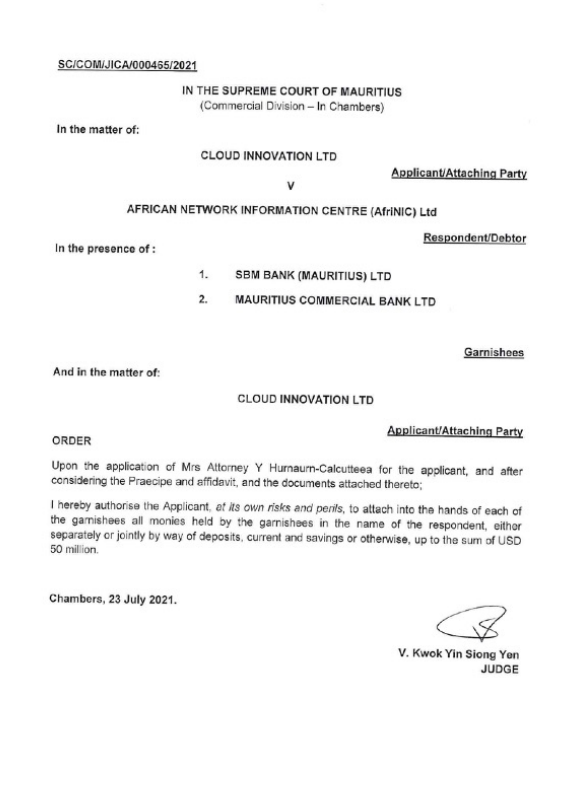